The other day I found a cool thread of discussion on LinkedIn.  LinkedIn for Creators had written a post on writing style they call  “broetry”. 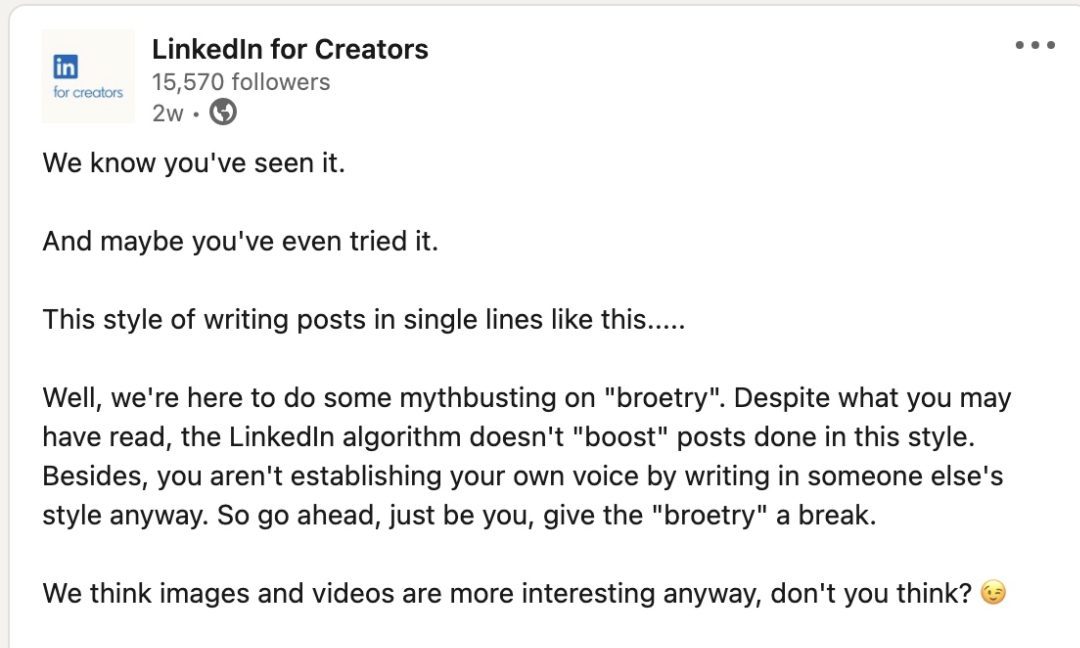 In case you’re interested in social media communications beyond occasionally using LinkedIn and Twitter to “release” some information about your development cooperation project, then go and check out the discussion that ensued.

What people express there is true for other social media to a large degree as well. It all comes back to how traction is created on social and how you can retain it. Also important is whether you can still get particular messages across when you’re maybe too consumed with getting traction because you’re doing all sorts of things that won’t fit you or your clients.

Every era has fashions and fav styles

Broetry is like a set of tweets, maybe also a bit of a staccato style of writing. It has certain advantages in terms of getting attention and retaining it. It requires some adjustment to fit the respective medium and post type used and, in a more abstract sense, it resembles our current communicative mindset.

However, most importantly, I find broetry or extreme forms of short and snappy won’t work if your job is to convey more complex information for, say, a difficult product or service of a client.

So it might be an old hat but it simply depends on what your goal is.

And what concerns the current mindset: If you really believe everything must be short and snappy nowadays, then you might run into a problem of stimulating appetite but never giving people what they really need — though they might not be aware of it.

It’s like offering canapés all night at your work function

You get people’s appetite going, they nibble away waiting for something real to satiate their hunger.

What is the effect on them? Some will be disappointed when you never dish out any proper food. Others might keep on munching your canapés and at the end of the day, they feel a bit upset in their stomach.

On social media some turn away eventually and go somewhere else to get something more substantial. Others thumb through posts by the mile every day, not realizing what it is that makes their brains unhappy.

If it was clear that the function would be a two-hour get-together for networking and maybe the invite even mentioned “finger food will be served”, then you’ll be fine on the food side.

But if you wrote that the new global program X will be presented and you have not much more than a headline on a chart and no further background information, then everyone from journos to people affected by it, who specially came for this information will be extremely disappointed with you.

Yes, this will work for some social media. For others, like Facebook, this doesn’t really work well at all. It’s a skim-through medium. Besides, all social media nowadays work heavily on keeping visitors on their territory. So they work against you when you try to drag them over to your site.

Facebook’s piece of the social media pie is huge. Here’re some indicative stats from StatCounter.

Anybody, no matter what product, service or information he or she has to offer, will consider utilizing Facebook at some point. The potential is just so humongous.

But when is it a good idea to use Facebook? When is it a waste of resources? And when might it be of a disservice to your client?

My personal small and absolutely non-representative research with people in development cooperation has shown that most of them use Facebook only for family interaction or to have an occasional look at what other projects are doing. So if your target group is other professionals in development cooperation, Facebook might not constitute that big a “market” in the first place.

Mike Stelzner is a big number in social media

His Social Media Examiner and their annual events are the go-to places to get the latest critical social media insights. His company doesn’t only operate the Social Media Marketing Society ⏤ which I’m a very satisfied member of ⏤ and provides all sorts of great insights and tutorials. They also have classic clients, who hire them to construct and write up materials etc.

In 2019, Mike had a moment of deep reflection, an a-ha moment as he calls it, which was actually quite a terrible moment, I guess. All of a sudden it became very clear to him that Facebook is a drive-by experience, like billboards on a highway.

Here is an excerpt of an interview with Mike Stelzner on Agents of Change conducted by Rich Brooks of flyte new media.

Mike: And here’s what it comes down to. Under the data that YouTube provides you, it says that the average viewing session on YouTube – the average – is 40 minutes of viewing video. So when people sit down they stay there for 40 minutes and just watch nonstop videos.

Now think about your average experience on Facebook. You’re in there for 2 minutes if you’re lucky, right? You’re just scrolling through the feed – unless it’s your job – you’re scrolling through the feed, you’re looking for stuff, and you’re moving on. And that’s how it is. I use the analogy that it’s kind of like if you’re driving on the highway and you saw a billboard playing a TV show, would you ever pull over and watch it. Never.

Rich: Of course not.

Mike: So a video on Facebook is a drive-by experience. And that was my “a-ha” moment, and I realized, holy crap, I’ve got to change everything.

Mike: Ok, wonderful question. So let me tell you a little story to help anecdotally explain why this is so important that people stop doing this. First of all, I made a 2-minute video, a public service message, and I just said we’re not producing any more shows on Facebook and here’s why. I cannot tell you how many comments I got from people saying, “This is the first time I’ve seen a video from you in years, and I made you “see first” on my Facebook.”  Do you know what “see first” is?

Mike: So if you’re a fan of a page you can choose your notifications, and one of them is “see first”, which means you automatically see everything, supposedly. And a lot of people said, “I’ve been a fan for years and I have not ever seen a video from you until you produced this one public service message video.” — Rich, we had been producing 4 videos a week for two years!

Rich: I can’t even imagine what the costs were involved with creating all that video. And there were benefits to it no doubt, but just to have a full-time person, all the editing, all the time it takes out of your day even though it’s filming what you’re already doing. Still, that must have been a huge expense.

Mike: Yeah, it was. But so here’s why you should not just put video up there. Because your fans won’t see it and it will hurt you in the algorithm. Not only did people say they haven’t seen any videos from me in years, they said they hadn’t seen anything from me in years.

So it turned out what happened is the algorithm was suppressing everything we were doing because we were publishing content 4 times a week that had no meaningful engagement by the metrics that Facebook cares about. And as a result, they decided to penalize us, and they decided to no longer show any of our content.

And this is the thing everybody needs to understand, the algorithm is artificial intelligence, it’s making decisions about your content and about your audience, and deciding what to show and what not to show. And if you program the algorithm that the stuff you produce is not meaningful to the audience, they will never watch it. And to the people that say, “Well if you only produced better stuff, you’d be fine”, I would say well then why is it the exact same audience watches it on YouTube that watches it on Facebook, and they watched it longer on YouTube?

If you’re interested in it, go and check out the entire interview: Facebook Video: The Good, The Bad, and the Really, Really Ugly – Mike Stelzner